A tower crane hire company has been fined after a worker fell two metres when the podium steps he was working on toppled over.

Cambridge Magistrates’ Court heard that, in November 2017, a worker was welding metal components at a site on Whittlesey Road, Peterborough, PE7 2PP when he fell. He was working at height on a set of podium steps which had been taken from another factory. The steps toppled over, causing the employee to fall approximately two metres to the floor and fracture two vertebrae. 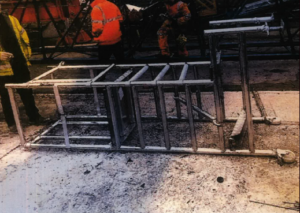 An investigation by the Health and Safety Executive (HSE) found that the company had failed to follow its internal procedures, and did not carry out a risk assessment nor determine a safe system of work. The podium steps had been modified with the addition of incorrect feet, contrary to the manufacturers’ instructions. Stabiliser bars had also not been fitted and workers had not been trained in their correct use.

London Tower Crane Hire & Sales Limited of Elstree Way, Borehamwood, Hertfordshire, pleaded guilty to breaching Regulation 6 (3) of the Work at Height Regulations 2005. The company has been fined £54,000.00 and ordered to pay costs of £1,544.00.

After the hearing, HSE inspector, Parmjit Gahir, said: “This was a wholly avoidable incident, caused by the failure of the company to adequately plan its work, and put basic safeguards in place.

“The case highlights the importance of following industry guidance in order to select and correctly assemble access equipment, along with implementing the necessary training, instruction and supervision to prevent such falls occurring. Podium steps are a recognised safe solution for working at height however, if they are used incorrectly, they can become a danger themselves.”