Company and contractor fined after failing to prevent exposure to asbestos

An industrial packaging manufacturer and its Cheshire based maintenance contractor have been fined after workers disturbed asbestos at the Cheshire factory when dismantling a large industrial oven during demolition works.

Manchester Magistrates’ Court heard that, between 1st March 2019 to 31st May 2019, C Facilities Support Limited who trade as ‘CFS’ had been contracted by Greif UK Limited to remove redundant equipment from their premises in Ellesmere Port. During demolition works, asbestos was suspected in the oven gaskets and rope seals which was confirmed by a sample survey. Despite this knowledge by both Greif and CFS, demolition works continued by CFS operatives. Greif UK Limited had instructed a worker to clean the area works without knowledge of the asbestos containing material or suitable control measures in place. The area was also being used daily by Greif employees, as a thoroughfare to other parts of the factory. 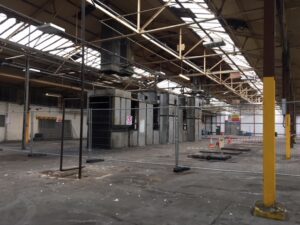 An investigation by the Health and Safety Executive (HSE) found that prior to the demolition work starting, no risk assessment, plan of work or demolition survey had been carried out on the oven.  A full survey was carried out which confirmed asbestos containing materials to be present within the oven at multiple locations. The materials were found to be in poor condition, having been disturbed and damaged during dismantling of the oven.  Greif UK Limited failed to advise their contractor in advance of the presence of asbestos in the oven and employees were not informed of the potential of exposure. Neither company had a suitable safe system of work in place or provided adequate information, instruction and training to employees.

Speaking after the hearing, HSE inspector Catherine Lyon said, “The dangers associated with asbestos are well known and advice and guidance is freely available from HSE and other organisations. Those in charge of premises have a duty to inform contractors of the presence of asbestos containing materials, ensuring that works are carried out safely.

“Those undertaking work which is likely to disturb asbestos, or asbestos containing materials should ensure that building occupants and operatives are not exposed to asbestos. Those undertaking the work should also provide suitable information, instruction and training to their employees.