The fabrication division of Nasmyth Technologies Limited has been fined after four employees were exposed to hazardous substances that caused significant ill health and time off work as a result.

Poole Magistrates’ Court heard how, on the 9 October 2017, between 150 and 200 litres of a chemical preparation, that included hydrofluoric acid, spilled across a large area of the factory floor in Wimborne, Dorset. Four workers were involved in the clean-up that took several hours. They were provided with inadequate personal protective equipment (PPE) and respiratory protective equipment (RPE) to undertake a clear up, for which they had no training. Some of them suffered ill health following the incident, which included an asthma attack, a severe headache, nausea, sore eyes and throat. One of the workers, whose symptoms persisted, was referred by his doctor to a specialist for treatment. 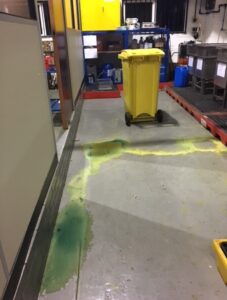 An investigation by the Health and Safety Executive (HSE) found that there was significant non-compliance regarding management of substances hazardous to health. The company had failed to carry out a suitable and sufficient assessment and had not prepared for this emergency situation. One of the failings was that the RPE (face masks) provided did not have the correct type of filter for protecting against hydrofluoric acid gas. Additionally, the type of RPE provided to workers relied on a good seal against the face in order to protect workers and no face fit tests had been undertaken to ensure the masks fitted the workers’ faces.  Furthermore, workers were unshaven meaning their beards or stubble prevented an effective seal of the RPE to their faces.

Nasmyth Technologies Limited of Nasmyth House, Coventry Road, Exhall, Coventry pleaded guilty to breaching Section 2(1) of the Health & Safety at Work 1974 Act. They were fined £13,000 and ordered to pay costs of £9,551.

Speaking after the hearing, HSE inspector Berenice Ray said: “This incident could have so easily been avoided had the company firstly undertaken a suitable and sufficient risk assessment and then implemented the necessary controls, including emergency arrangements for dealing with a chemical spill and the provision of instruction and supervision to ensure safe working practices are followed.